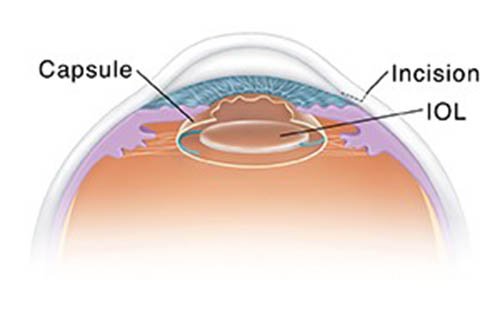 The crystalline lens has a cellophane-like outer lining called the capsule. In most cataract surgeries, the posterior capsule has been left intact to support the intraocular lens implant that was inserted at the time of surgery.

Image above showing an intraocular implant placed in the original lens capsule.

Posterior capsular opacification (PCO) results from the proliferation and migration of cells within the lens capsule, causing it to become wrinkled or cloudy. It is the most common occurrence after uneventful cataract surgery and can occur within weeks, months or years after. Your vision will become blurry when the centre of the lens capsule becomes affected.

A laser treatment known as YAG laser capsulotomy can be done to improve your vision by creating an opening in the cloudy lens capsule to allow the clear passage of light. It is a quick and painless procedure that only takes minutes to perform. This can be done in the clinic where there is a YAG laser machine. 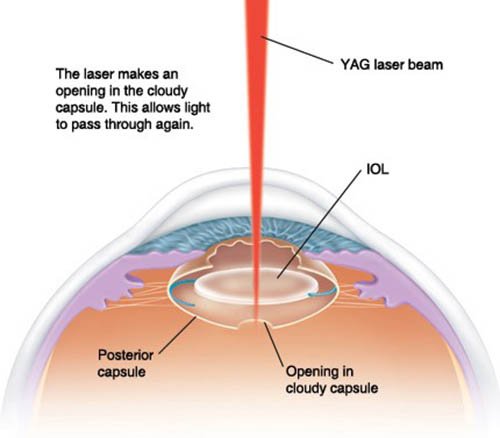 Image above shows how the YAG laser makes an opening in the cloudy posterior capsule.

Many people may eventually require a YAG laser capsulotomy sometime after cataract surgery, especially those who underwent surgery at a younger age. The need for this laser treatment should not be a cause of worry since the wrinkling or clouding of the capsule is part of the body’s normal healing process.