Blepharitis is a term to describe eyelid infections. Read on to find out more

Blepharitis is a common condition. In an American study, Ophthalmologists and Optometrists have stated that 37% and 47% of their patients respectively have developed blepharitis symptoms before.

The same study further found that younger persons were more likely to report blepharitis signs than their older counterparts, which differs from common knowledge about blepharitis and eyelid inflammations generally.

Serious damage can occur to your eyes or eyelids if blepharitis is left untreated. It is recommended that you visit your local doctor or eye specialist if the symptoms last more than a week.

There are several possible causes of blepharitis, including:

Symptoms for dry eyes often occur simultaneously with blepharitis, and it is unclear whether it is dry eyes that are the cause of the blepharitis infection, or if blepharitis causes dry eyes.

Blepharitis usually is correlated with an excess of bacteria around the edges of the eyelids and particularly at the follicles of the eyelashes. The bacteria propagate in time and create something medical professionals refer to as “biofilm”.

This biofilm is much like plaque that appears on teeth. It is a toxic environment that allows eyelash mites called “Demodex” feed and thrive. This results in a flourishing of these mites, and this further worsens the eyelid inflammation already in place. Within the biofilm also resides a variety of bacteria that create substances known as “exotoxins “. This can cause inflammation of meibomian glands, which are oil glands responsible for secreting oil that coats the eye’s surface. This leads to a condition known as Meibomian Gland Dysfunction (MGD for short), which may also lead to a worsening of dry eye symptoms.

Other causes may be due to our daily routines. Our eyelids may become infected due to accumulation of oil or dirt at the roots of the lashes. Many times, inadequate removal of makeup is a major culprit.

Common blepharitis symptoms are listed below:

Patients may experience some or all of the above symptoms, and may not always be present. In rare cases, loss of eyelashes – known as madarosis may occur.

Blepharitis also is common in patients that use contact lens. Improper use or bad eye hygiene may foster a suitable environment for bacteria and parasites as a result.

Visit with your eye specialist or doctor to ascertain the basis of your blepharitis or eyelid infection/inflammation. A thorough investigation of the eyes and eyelids will allow the doctor to evaluate whether you are indeed suffering from blepharitis and prescribe the appropriate blepharitis treatment.

Depending on the medical profession you visit, blepharitis treatments may include: 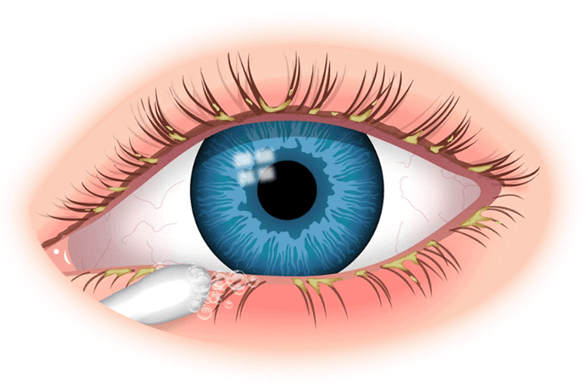 Eyelid hygiene is crucial in the treatment and management of blepharitis symptoms. Improper hygiene may lead to a worsening of the blepharitis condition.

First, use clean, warm compresses to help unblock residue in the meibomian glands in your eyelids. Here’s how:

At Asia Retina, we are able to isolate the demodex mite by placing a single eyelash under the microscope. Demodex is easily treated by anti-parasite ointment and eyedrops; although there is chance of recurrence. If you experience prolonged eye itchiness or discharge, get your eyes checked for any insidious infections.