An Epiretinal Membrane (also known as ERM) is a fibrous tissue overgrowth that occurs on the internal surface of the retina, overlying the central macula. Very often, it leads to traction and wrinkling of the retina which leads to decreased vision and metamorphopsia. 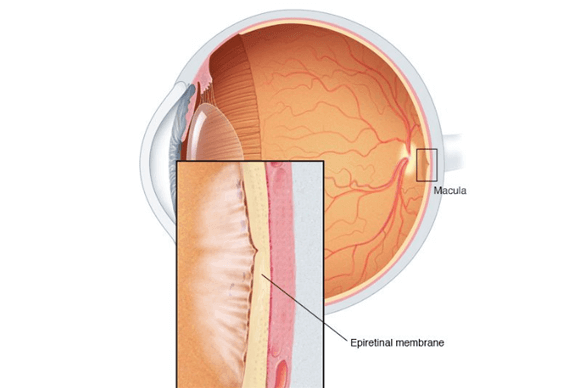 What is an Epiretinal Membrane?

Epiretinal Membranes are also known alternatively as macular puckers, or cellophane maculopathy (due to the resemblance to cellophane tape). They manifest as translucent membranes that attach to the inner surface of the retina inside the eye. The affected eye usually experiences minimal symptoms and usually does not require immediate action. Though sometimes, the epiretinal membrane can result in loss of vision without pain, or cause distortion in vision.

In a general sense, epiretinal membranes project symptoms most frequently when it grows over the macula – the part of the retina that we use to distinguish finer details, such as reading.

Causes of formation of an epiretinal membrane

The cause of an epiretinal membrane forming is due to a fault in the exterior coating of the retina where a group of cells – glial cells, can relocate and start to grow in a membranous layer on the retinal surface. This membrane can resemble cellophane. It also runs a risk of shrinking as time passes. If this film shrinks, it may pull on the parts of the retina that it is attached to and result in a macular pucker, or lead to a wrinkle on retina surfaces, causing damage. As a result of damage caused, symptoms like distorted or even loss of vision, particularly central vision.

Epiretinal Membranes can be linked with a range of eye conditions such as retinal tears, retinal detachment or macular pucker. Also related are vascular diseases of the retina, like diabetic retinopathy or vascular occlusions. There has been data to show that epiretinal membranes can also occur after certain events that may cause trauma, such as ocular surgery, or be associated with intraocular (inside the eye) inflammation.

Since it is a degenerative change, an Epiretinal Membrane may be thought of as an unwanted ‘scar tissue’ that occurs on the retina.

Most sufferers of epiretinal membranes exhibit no symptoms. The existence of their ERMs are only discovered during a dilated retinal exam with their eye specialist, or when retinal imaging is done, such as during ocular coherence tomography (OCT). Patients in this situation typically do not describe noticeable changes in their vision, and possess normal or near-normal vision. However, epiretinal membranes can slowly progress in the eye, leading to visual distortions. A simple way to more clearly discern these distortions is to close the eye that is NOT experiencing or less affected by epiretinal membrane.

Patients may notice distortions in the vision known as “metamorphopsia”, a symptom in which shapes that are normally straight, like table edges, door or window sills, appear bent, crooked or wavy. This is more apparent when the same object is viewed with each eye, separately. Left untreated, this condition can slowly degenerate and eventually lead to decreased vision. In rare cases, ERMs may also result in double vision, light sensitivity or magnification of images, making the objected view seem larger or smaller than they actually are.

Most ERMs are observed to stay somewhat constant after the first stage of growth. In these cases, the ERM can simply be kept under observation as long as it does not present a significant obstruction to the patient’s visual ability. There have been select cases, however, where the ERM will automatically detach itself from the retina, releasing the traction and also resulting in an alleviation in visual symptoms. However, if an eye exam shows marked progression of size and growth of the ERM, and/or a degeneration in the visual ability or acuity of the patient, epiretinal membrane surgery may be recommended.

A surgical procedure known as vitrectomy surgery is used during epiretinal membrane surgery. With vitrectomy surgery, small incisions are made in the white of the eye. The vitreous gel inside the eye is first removed, then substituted with saline fluid. This then allows surface of the retina to be accessed with forceps, where the ERM can then be removed delicately. With the removal of the ERM, the traction and forces on the retinal surface are then removed, thereby allowing the macula to loosen and wrinkling is reduced or fully recovered from, in time.

The epiretinal membrane surgery in detail is executed via microscopic ‘keyhole’ surgery. Three tiny self-sealing incisions (each less than 0.5mm in size) are all that are needed to remove ERM. Visual outcomes are best when the membrane is removed early before it causes any damage to the retina.